skip to main | skip to sidebar

Benefit of Honey, Helps Children who are suffering from cough 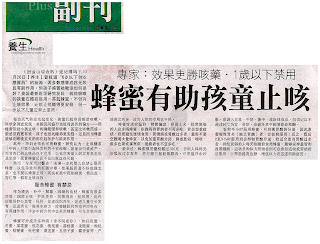 Honey proves a better option for childhood cough than OTCs
Wednesday, December 5, 2007
Hershey, Pa. — Now that the safety and effectiveness of children’s cough medicines are in question, what can parents do to help their child deal with a troublesome cough?

A new study by a Penn State College of Medicine research team found that honey may offer parents an effective and safe alternative. The study found that a small dose of buckwheat honey given before bedtime provided better relief of nighttime cough and sleep difficulty in children than no treatment or dextromethorphan (DM), a cough suppressant found in many over-the-counter cold medications.

Honey did a better job reducing the severity, frequency and bothersome nature of nighttime cough from upper respiratory infection than DM or no treatment. Honey also showed a positive effect on the sleep quality of both the coughing child and the child’s parents. DM was not significantly better at alleviating symptoms than no treatment.These findings are especially notable since an FDA advisory board recently recommended that over-the-counter (OTC) cough and cold medicines not be given to children less than 6 years old because of their lack of effectiveness and potential for side effects.

The results are published by Penn State College of Medicine researchers, led by Ian Paul, M.D., M.Sc., in this month’s Archives of Pediatrics and Adolescent Medicine. In a previous study published in 2004, Paul and colleagues showed that neither DM nor diphenhydramine, another common component of cold medications, performed better than a placebo at reducing nighttime cough or improving sleep quality. However, honey has been used for centuries in some cultures to treat upper respiratory infection symptoms like cough, and is considered to be safe for children over 12 months old. Honey has well-established antioxidant and antimicrobial effects, which could explain its contributions to wound healing. Honey also soothes on contact, which may help explain its effect on cough as suggested by the World Health Organization.

In the latest study, the researchers enrolled 105 children between the ages of 2 and 18 at a single university-affiliated physician practice site. On the first night of the study, children received no treatment. Parents answered five questions about their child’s cough and sleep quality as well as about their own sleep quality. On the second night, children received either honey, artificial honey-flavored DM or no treatment about a half hour prior to going to bed. Parents answered the same five questions the following morning.

The randomized study was partially double-blinded: Medical staff did not know what treatment each participating family received when distributing their sealed syringe-containing envelope. Parents of children who received honey or artificial honey-flavored DM in a measured syringe were blinded to their treatment group. Parents of children in the no treatment group received an empty syringe, and therefore were aware of their child’s treatment group. Across the board, parents rated honey as significantly better than DM or no treatment for symptomatic relief of their child’s nighttime cough and sleep difficulty. In a few cases, parents did report mild side effects with the honey treatment, such as hyperactivity. "Our study adds to the growing literature questioning the use of DM in children, but it also offers a legitimate and safe alternative for physicians and parents,” said Paul, a pediatrician, researcher and associate professor of pediatrics at Penn State College of Medicine and Penn State Children’s Hospital. “Additional studies should certainly be considered, but we hope that medical professionals will consider the positive potential of honey as a treatment given the lack of proven efficacy, expense, and potential for adverse effects associated with the use of DM.” Potentially dangerous effects of DM in young children include dystonic reactions, severe involuntary muscle contractions and spasms. Further, DM is a commonly used as a drug of abuse by adolescents.

Cough is the reason for nearly three percent of all outpatient visits in the United States, more than any other symptom. It is particularly bothersome at night because it disrupts sleep. Consumers spend billions of dollars each year on OTC cough and cold medications despite little evidence that these drugs provide significant relief.

This study was funded by an unrestricted grant from the National Honey Board, an industry-funded agency of the United States Department of Agriculture.

*This article is retrieved from the website: http://live.psu.edu/story/27584
Posted by MR TEA at 5:21 AM No comments: Links to this post